‘The voices of the people must be heard’: an interview with Malini Subramaniam

On Thursday evening 19 January, Indian research journalist Malini Subramaniam received the Oxfam Novib PEN Award 2017 for her courageous investigative reporting. ‘You would not expect that in the world’s largest democracy, India, free press is oppressed.’

Malini Subramaniam is an award-winning Indian research journalist and contributor to the independent news website Scroll.in. Until recently, Subramaniam lived in Bastar, Chhattisgarh in east-central India. In this region, rocked by insecurity and Maoist attacks, she gave a voice to farmers and illiterate villagers who are caught or as she puts it ‘sometimes deliberately dragged’ in the conflict between Maoist rebellion groups and Indian security forces.

Subramaniam reported on the alleged harassment of journalists, allegations of sexual violence committed by the security forces and alleged human trafficking. Because of her reporting, she was threatened by a local pro-government vigilante group and was forced to leave her hometown. 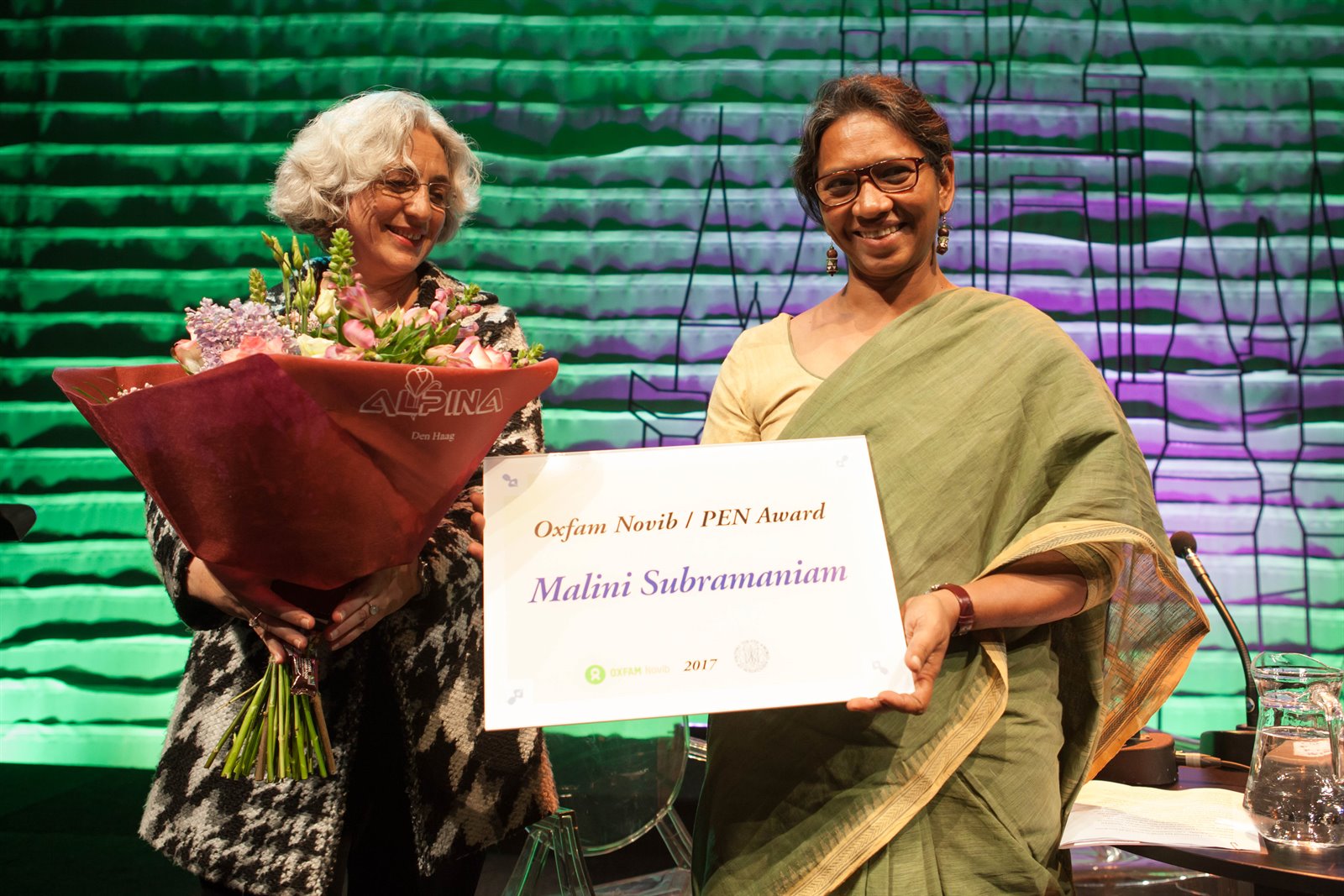 What was your first response to your nomination for the PEN Award?

“It was around the same time that I received the news about winning the Committee to Protect Journalists (CPJ) Award, so it was a double surprise for me. I immediately told my editors. I asked them: ‘What to do, shall I accept it?’ They said: ‘Yes, go ahead. You deserve it.’  That was around November.”

“Receiving this award – for what I believed was simple reporting – forces one to reflect on why a country like India is subject of these awards. Freedom of press and expression should be a given in a secular democracy. These awards normally go to journalists that work in difficult and oppressive governments, like dictatorships.”

“The last time an Indian journalist received the CPJ’s press freedom award was in 1994. It was given to a journalist who worked in Kashmir. The Kashmir conflict or the situation of conflict in the North Eastern states is known abroad. News from other regions in India, for example Chhattisgarh, Jharkhand, is kept completely under cover.”

We don’t hear much about the Maoist attacks in India and the severe situation of the people who live in this conflict area?

“India sends the message that everything is fine, except for a few places like Kashmir. Unfortunately, this is not true. The conflict between Maoist groups and the government is going on for almost two decades in our region and that is a long time.”

“Children who have seen violence and who ran away from their homes because of the situation are now grown-ups. If you don’t deal with situations of violence and displacement, the frustration, anger and confusion will grow. And the main question is how to deal with it and whether the current approach of dealing with the situation is helping the people.”

“The reason why I and others investigate and write about what is actually happening to the people, is to make sure their voices are heard. Writing about people’s real situation and perspective should help the government in a critical analysis of their policies so that they can respond to people’s real needs. Strangely, they only made it more difficult for journalists and writers to visit these places. They don’t want us to report.”

What is the reason for this cover-up?

“Nine states in India are severely affected by Maoist insurgence. Most of these regions are on the Eastern side and inhabited by the indigenous community. More importantly, this region is very rich in minerals. There is a strong business interest in these areas. The government wants to move on and wants companies to invest in mining. Therefore the situation has to appear stable. They want to convey the message to the (prospective) investors that the government is dealing ‘’successfully’’ with the situation.”

When did the threats start?

“In 2016 the government started ‘Mission 2016’ to wipe out the Maoists in the region and to go against Maoist propaganda. After I wrote about state excesses and what is happening to the people because of the state’s behavior, they immediately framed me as a person who is against the government and with the Maoists.”

“In February last year a vigilante group, clearly instructed by the police, started harassing me. At first it started with questions like ‘Why are you writing stories that are negative about the police?’ This was followed by the police making rounds to my home seeking information on my family, vehicles, landlord, etcetera, hoping that such threats would stop me from writing.”

“Gradually they acted more aggressively as my reports were still published. One evening they marched into my house. They were yelling and shouting ‘she is a Maoist supporter’ and ‘death to Malini Subramaniam.’ They were throwing stones and the windows of my car were smashed.”

I called a senior police officer who refused to respond to my calls. Later, after intervention from my editor to the highest authority in the State, senior police officers came, promising to look into the matter. Instead, neighbors who were willing to testify in my favor, were threatened to withdraw their statement. It was clear that the police was working together with the vigilante group. In fact, one TV channel exposed the link between the police and the group and the group was forced to disband itself. Until then, of course the situation worsened and my editor advised me to leave the town fearing for my safety.”

How is the media situation in Bastar now?

“Soon after I left, two local journalists were arrested and a BBC Hindi journalist was also threatened and had to leave the region. Two were arrested before they began to target me. Very recently, they arrested seven human rights activists who were fact finding. Especially the local journalists work under a lot of pressure and are often threatened by the police as a result of which they are forced to cover police handouts as stories at the cost of ethical reporting.”

Did you get support and publicity in your country?

“National news did cover my situation and the situation of journalism in Bastar. I did share this in a couple of interviews as well. More importantly the Editors Guild in India, a very well respected body, came to investigate the situation and they concluded that not one journalist feels safe in Bastar and that journalists cannot visit these places freely.”

How did the Indian government respond?

“The Editors' Guild, as part of their assessment, even met the Chief Minister and senior state police officials. Their responses were mostly diplomatic: ‘we’ll look into it, we are all for freedom.’ There has been no official response whatsoever to the report. The Members of Parliament are there for another five years and they feel that nobody can touch them.”

Is the Award helping you to continue your work?

“My husband and daughter went back to Bastar and the people in the community congratulated them. They said: ‘So the government was trying to hide their own wrong-doing by accusing her.’ It is a great acknowledgement for my work and this Award motivates me to go forward with investigative journalism in India.” 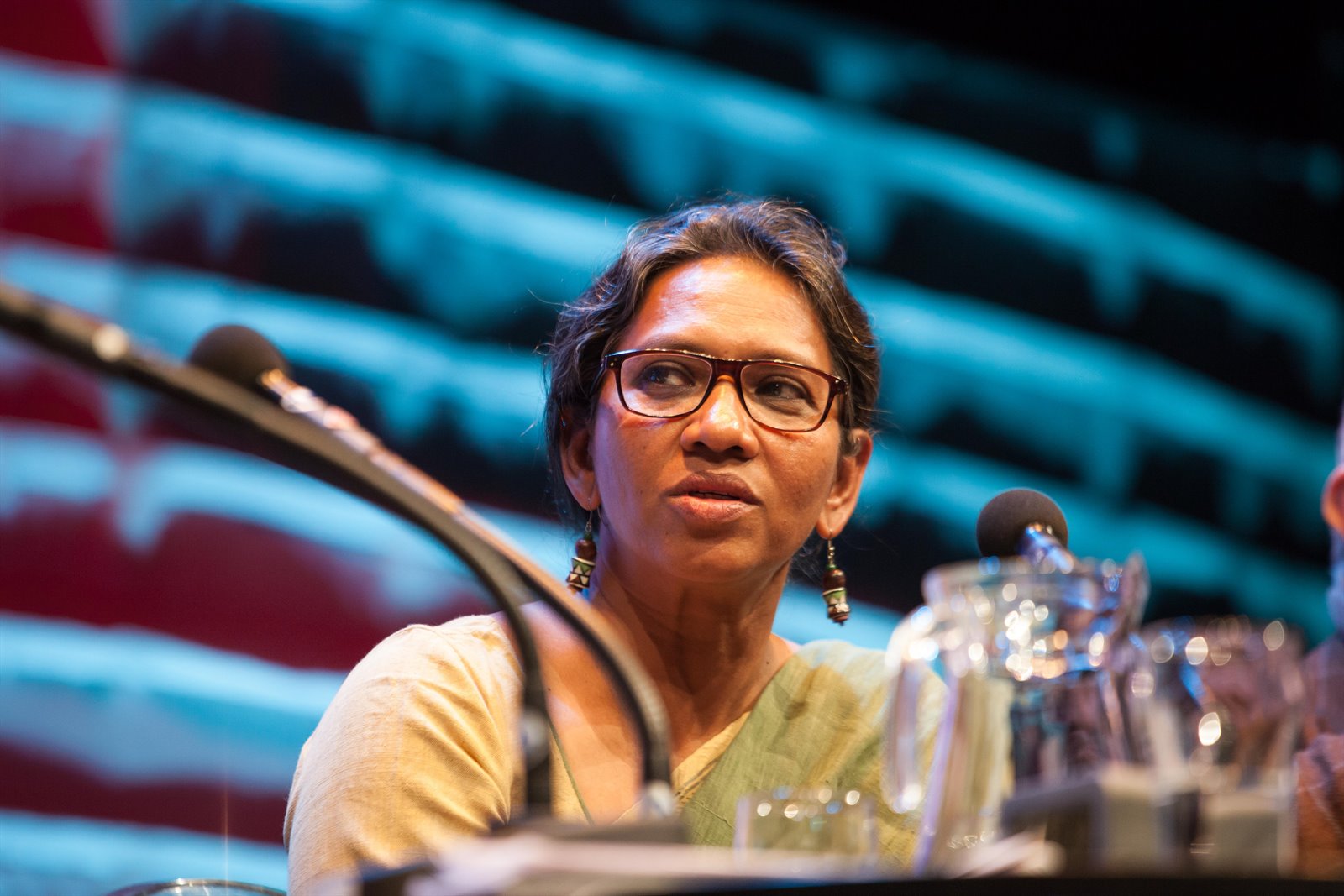