The lost village of Gansé

What do you see in this picture? It looks like a peaceful lake surrounded by lush greenery, doesn’t it? 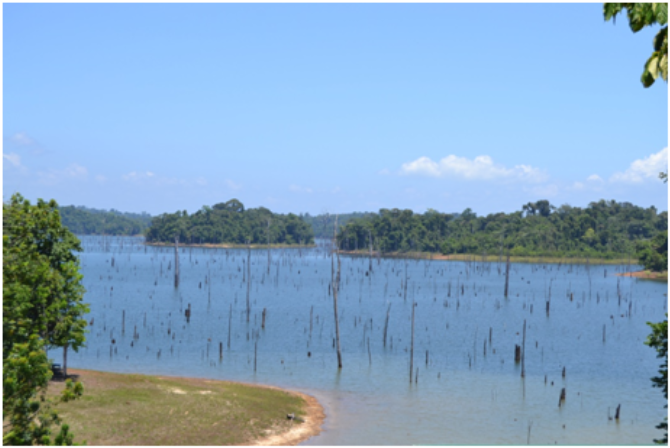 I took this picture last year when I was visiting the place my grandparents used to live. It is actually the Brokopondo water reservoir in the jungle of Suriname. About 60 years ago, around 5000 people used to live in this area. One of those villages was called Gansé, and according to the stories of my grandmother, it was beautiful. However, the villages including Gansé, disappeared under water with the construction of a dam and the creation of the water reservoir. The communities did not have secured land rights and with promises of a better life somewhere else, they were forced to abandon their homes.

Unfortunately the promises were not realized. The only visible proof of the communities living there, many years ago, are thousands of dead tree tops rising above the water’s surface. In an effort to save money, the trees were not cut down before flooding the area.  The reservoir is now one of the largest reservoirs in the world and the dam provides electricity to industries involved in the processing of bauxite into alumina.

Not only in Suriname, but also in the rest of the world, indigenous and local communities are vulnerable to pressures from more powerful actors as they don’t have formally recognized land rights. Land is an essential part of their cultural identity and a way to survive and develop. That is why I am supporting the Land Rights Now Campaign at Oxfam Novib. This is a Global Call to Action and we aim to engage and mobilize communities, organizations, governments, and individuals worldwide to promote and secure Indigenous Peoples and local communities’ land rights.

How the rotten smell of the earth can save your life

Working on the campaign with an amazing team of passionate people has made me realize how fundamental land rights are for indigenous peoples and local communities, but also for all of us. Last week, I conducted an interview with an indigenous woman living in the mountains of Taiwan. She explained that many indigenous peoples in the country have suffered from the typhoons that are frequently occurring because of climate change.

Her community started a project that includes the creation of early disaster warning systems based on the documentation of traditional knowledge from the indigenous peoples living in the high risk areas.  She explained: “Just before a landslide, you can feel the ground changing, you can smell a distinct rotten smell and you can see the color of the river changing. You can hear the rocks running from the mountains and the different sizes of the rocks tell you what stage the landslide is”. This knowledge is now used to build an early disaster warning system in many areas of the country. Read more here.

Indigenous peoples are “living encyclopedias” with in-depth knowledge of every aspect of the environment. They are finding innovative and practical solutions for fighting climate change by drawing on their traditional knowledge. They protect the forests and biodiversity, manage lands, sequester carbon, and preserve our ecosystem. Recognizing the rights of indigenous peoples and local communities is therefore not only key to fighting climate change, but also to ensure that communities, such as the one in Gansé, are not forced to move from their ancestral lands.