Oxfam Novib recently launched the book ‘Beating the Drum: Stories of Influencing Networks’. It explores the efforts of nine networks around the world to influence decision makers on a variety of issues (including land rights, SRHR, public health, and animal welfare). To make a deep-dive into some of the topics of the book, Oxfam Novib hosts a series of webinars. The first webinar, which took place on 12 November 2020, was on the topic of ‘Community Mobilization’. 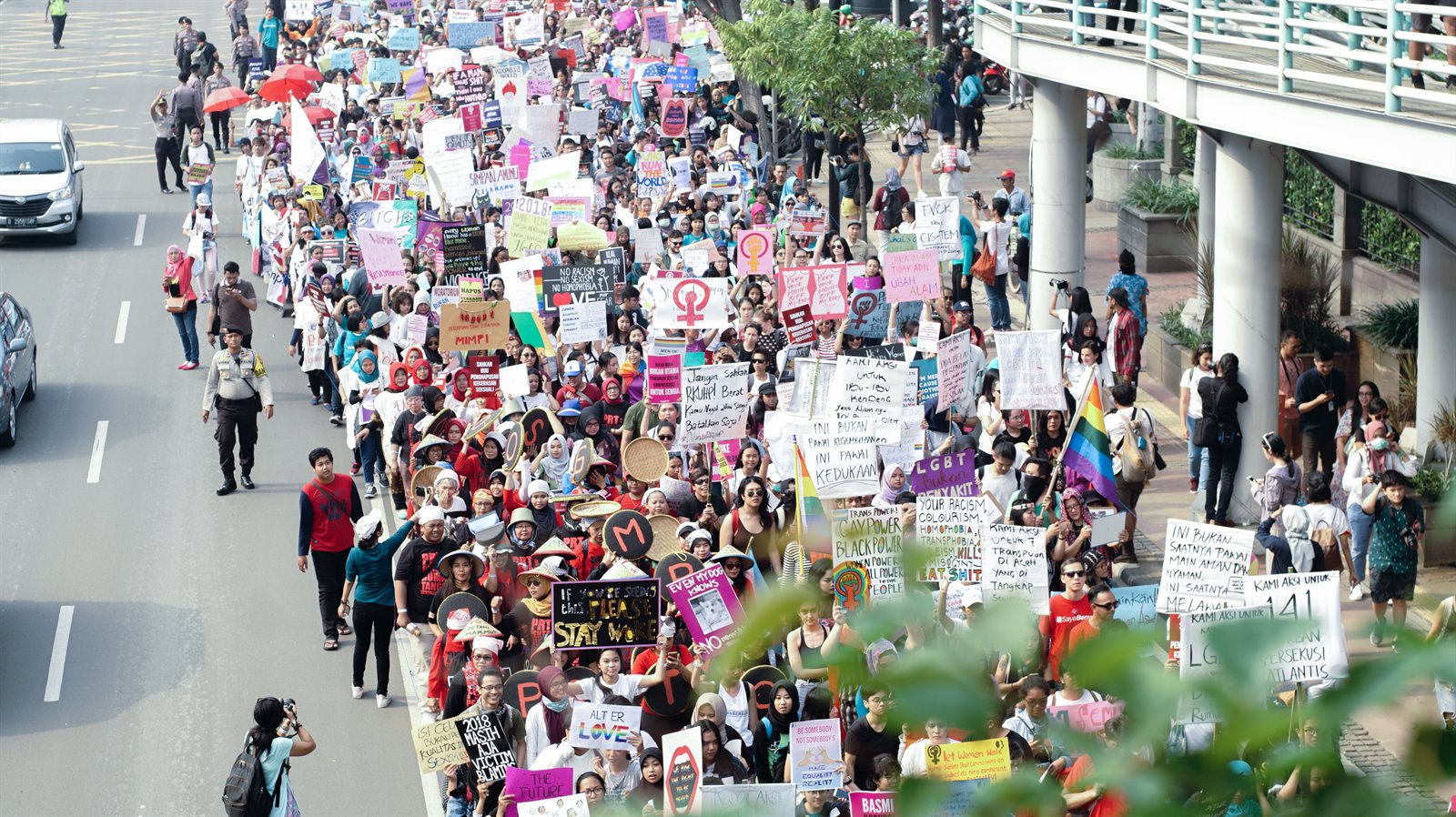 Lessons from Beating the Drum

In each and every influencing network that shared its experience in Beating the Drum, community mobilization was an important theme. Engaging the general public was seen as important in a variety of ways. First of all, strong public support amplifies the policy demand and strengthens its place on the political agenda. Secondly, mobilizing citizens and communicating their voices is important as the voice of citizens has a greater weight than the voice of Civil Society Organizations (CSOs) alone. It is vital for influencing networks to be rooted in their constituency, as this provides the network with credibility and protection.

It is vital for influencing networks to be rooted in their constituency, as this provides the network with credibility and protection.

There are many ways to engage the public. One approach is integrating influencing with service delivery as it creates legitimacy for influencing practices at the national level. Another approach is ensuring that the voices of different constituencies are represented in a campaign - as is done in the Financial transparency Index in OPT, explained below. Strategies around the citizens’ voice in influencing networks that target the intergovernmental level or multiple levels range from efforts to bring the human story into an otherwise abstract or technical debate to strategies of bringing in public support as a political weight. This is for example visible in the story on land rights from Sri Lanka, where the story of the Paanama community has been very powerful at international fora. At all levels of influencing, it appears important to combine a well-grounded evidence base drawn from research and practice, with a true human story.

The work of three influencing networks was presented. The first case was the More than Brides Alliance (MTBA) campaign #SayEnoughCypher, presented by Katinka Moonen and Michelle DoCampo. The second case was about the Financial Transparency Index (FTI) in OPTI, presented by Majd Al-Khoury. Lastly, Pubudini Wickramaratne presented a case on addressing land grabs in Sri Lanka through community mobilization.

MTBA: Youth led-community mobilisation is key to MTBA’s work. This is accomplished through youth-groups, established and capacitated during our 5 year project, which use art and sports to engage youth on sexual and reproductive health and rights, child marriage, importance of girl’s education, and how to use their voice to advocate for their needs and rights.

The #SayEnoughCypher was a campaign idea initiated by the Oxfam International Say Enough to Gender Based Violence (GBV) campaign during the 16 Days of Activism Against GBV. The campaign created a global “cypher” (i.e. an informal gathering of rappers) to perform slam poetry on the topic of  GBV and gender equality. The youth-groups, mobilized by MTBA, also participated in this global campaign. In Mali, Niger, and India local artists taught girls how to write their own spoken word/slam poem on the topic of child marriage, which were captured in videos and shared on various campaign platforms.

This global approach resulted in a large, organic reach of 43,506 people on social media – reaching an international audience in amongst others the US, UK, the Netherlands and India, as well as local audiences in Mali, Niger and India. The creative and girl-centered approach was appreciated because of its authentic nature. Furthermore, the process of bringing local voices of girls together in an international campaign strengthened the linkages within the influencing network – existing of an alliance of CSOs.

FTI: In the context of OPT, weak access to information, lack of legal mechanisms for safeguarding, weak and limited public services, and inequality between rich and the poor limit possibilities for citizens to raise their voice. The Financial Transparency Index was implemented in OPT to support citizens in raising their voice on public spending. This index maps the transparency of public spending in a participatory process with communities that are supposed to use public services.

Local (informal) committees were established at the municipality level to map public spending and influence their local governments to increase financial transparency. Here, the local context was leading the identification of issues to address. As public spending in the health sector was a common theme in many communities, Oxfam and partners (ARIJ, MIFTAH, and AMAN) launched a public campaign (“Right to Health” (R2H)), pressuring the national government to increase the budget of the Ministry of Health. This campaign, which was based on health research by partners, aimed to increase public budget allocation towards more healthcare providers and services in marginalized West Bank communities. To  manage political sensitivities, only independent agencies were part of this public campaign. Using amongst others visual material (e.g. posters and videos), tv and radio messages and social media to raise awareness on the campaign and its goal,  in three months 50 volunteers collected up to 50.060 signatures of citizens. The last day the volunteers were mobilizing citizens was the day of the first COVID-19 case in OPT.

While a significant number of signatures was collected, the network couldn’t go forward with its lobbying activities as a state of emergency was declared to deal with COVID-19. Subsequently, government spending has been directed towards the Ministry of Health and healthcare services in Palestine to handle the pandemic. Additionally, the prime minister announced that all government resources will be committed to the Ministry of Health and there will be additional staffing of healthcare providers.

Land rights: In the post conflict country context of Sri Lanka, lands continues to be occupied by the military or by the government. This means that land can be used at any given moment for military purposes or development related plans like tourism or investment projects. This results in communities experiencing compulsory land acquisitions, land grabbing and forced evictions.

This is what happened to the beautiful coastal village of Paanama in Eastern Sri Lanka. This story tells how the community of Paanama stood up for their rights, with the support of the People’s Alliance for Right to Land (PARL). Oxfam and PARL encouraged the Paanama community to form a community group that grew out to a community organization, the Paanama Pattu Protection Organization. Through the PARL network this community organization is connected with other communities facing land grabs across the country. Through this connectiveness, the community organization became part of collective campaigns of PARL at local-, national-, and international level – with success. A consultative process with the community was used by the PARL network when executing advocacy efforts, to keep local accountability, credibility and legitimacy. This approach also limited negative consequences of attempts by politicians to divide the community.

Women play a key role in keeping the community together and taking collective action. They have been confident in discussions at national policy forms and with members of Ministries and parliament. Furthermore, they presented their land grab case at international forums such as the International Tribunal on Evictions. They also complained to the UN Special Rapporteur on right to food and highlighted their case in shadow reports to international human rights mechanisms. At points where there was low community engagement, mainly due to issue fatigue, CSOs become more active and engaged more regularly with the community to keep up to date about concerns and make plans to maintain the energy.

Lessons from the break-out groups

Participants went into groups and had discussions around topics related to engaging the public, the credibility to influence, as well as linking different levels of influencing together. A few discussion points that were shared include:

We would like to thank the presenters and participants for this interesting session. If you’d like to watch the recording of this webinar, please send an email to win.learning@oxfamnovib.nl.