Increasing reach and engagement on Twitter: Identifying your (co-)influencers by adopting a network analysis

Social media are an integral part of Oxfam’s influencing work. Twitter is one of the many platforms used to gain public support for efforts to influence public and private sector policies. An example of such a campaign with an online strategy is the Peoples Vaccine campaign, which advocates for equal access to Covid-19 vaccines. Using the Peoples Vaccine campaign as a case study, we analysed the potential of Twitter data streams for monitoring and evaluation of a public campaign as well as for campaign implementation. 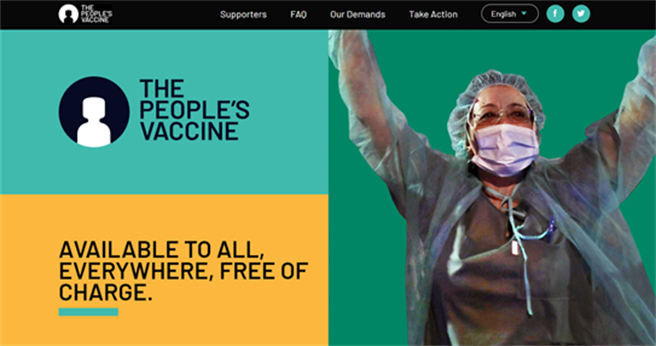 We harvested all publicly available tweets related to the Peoples Vaccine campaign for the period September 2020-June 2021. This was done based on content of the tweets and hashtags used. Then, we explored several ways of using all this harvested data. For instance, we looked at volume of tweets and tried to link spikes in volume to important campaign messages. We also considered reach, engagement, and influence of tweets.

Where the analysis shows that Twitter datastreams provide opportunities to complement conventional ways of MEL, this blogpost primarily focuses on usability of Twitter analysis for campaign implementation.

We took a deep dive and analysed how and to whom campaign messages spread. The data provided rich information about which tweets are shared by a specific user, as well as who is retweeting and replying to these messages. This allowed us to identify important influencers, which in turn could inform campaign implementation.

We found that the most active group of Twitter users, those accounts sharing the largest volume of tweets related to the Peoples Vaccine campaign, consists primarily of the to be expected users: those accounts which are part of the Peoples Vaccine Alliance. In addition, we discovered a potential ally for collaboration, since especially one political party (i.e. the Labour Party, PvdA) was highly represented among the most active users. A next step in identifying the influencers was looking at potential exposure. Here potential exposure was measured by multiplying the volume of tweets shared with the follower count. Media accounts stood out, which suggests that collaborating with media is a useful strategy to improve reach of campaign messages. Lastly, we looked at the most effective users in terms of triggering engagement – those Twitter accounts that have the highest average number of retweets per tweet related to the campaign in the harvested period. Here, we identified primarily politicians and other famous people. Hence, finding ways for campaign tweets to be picked-up by these high influentials can considerably increase engagement.

Lastly, we plotted the accounts that are retweeting each other in a network graph. In this way clusters of tweets are visualized, and you can see how one cluster of Twitter users is connected to the other. Linked to the above, we identified clusters of users around Oxfam and the Peoples Vaccine Alliance, politicians/political parties, and media. We also identified stand-alone clusters. 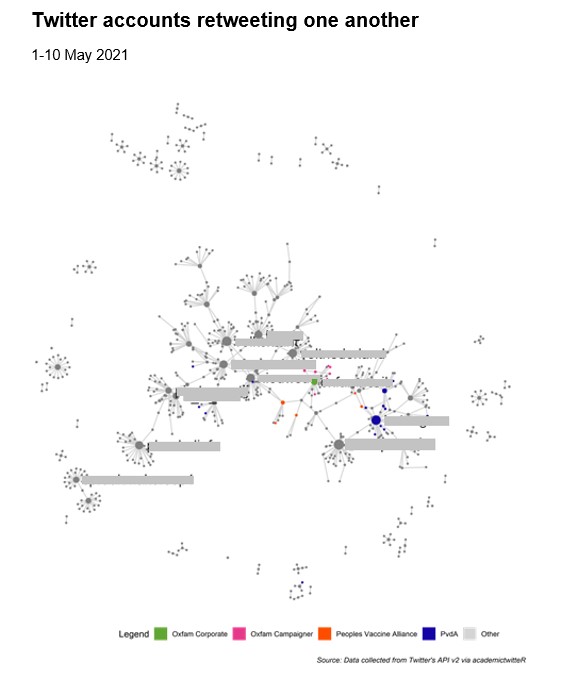 Network visualization of accounts retweeting one another; anonymized. Account names are available upon request.

The example demonstrated in this blog is illustrative for the easy identification of the main influencers in the Twitterverse. So, next to monitoring and evaluation benefits, Twitter analysis can be useful for campaign implementation specially to identify potential allies and unusual suspects to tap into to reach a new, bigger audience and to improve engagement. The main advantage of such type of analysis comes in at power mapping and analysis stage of the campaign.

Other tips and tricks to increase your potential influence on Twitter include: following the political momentum, being consistent in the usage of hashtags, tagging accounts you want to reach or accounts which may be influential, and directly calling for action (for instance, to retweet your tweet).

Excited about what analysing Twitter data can offer and would you like to apply it to your own campaign? Please get in touch with Oxfam Novib’s Learning, Innovation and Knowledge (LINK) unit (Marieke Meeske; marieke.meeske@oxfamnovib.nl).