Designing programmes which are young at heart

Researchers from Oxfam Novib asked young people in Uganda and Vietnam to share their problems, their hopes and dreams, and analysed the results to draw conclusions about what issues prospective development programmes should focus on. Here Karen Van Zaal and Ruben De Winne explain the methodology used and the significance of this approach for beneficiary led programme design.

Development initiatives are often designed far away from the actual place where they are implemented. This can mean that projects are either insufficient to bring about a desired change or do not focus on the core of the beneficiaries' problems.

Oxfam aimed to address these potential pitfalls in the design of a youth led initiative. Together with youth leaders in both Uganda and Vietnam, Oxfam asked young people to share their most pressing problems and aspirations. By doing so, they aimed to identify the key issues that Oxfam's programs should focus on, as well as strengthening ownership of several active stakeholders in these programs.

The World Citizens Panel (WCP) is a research method used to measure the impact of Oxfam's projects. Active participation of the project stakeholders throughout the impact measurement process lies at the heart of it, and its combination of qualitative and quantitative data makes the final impact assessment rich and reliable. These characteristics also render it a potentially useful method to let project stakeholders identify areas and strategies before an intervention is implemented. But can this work in practice?

In Uganda and Vietnam, the following experimental set-up was applied: a selection of youth leaders first asked fellow youth to share their "Stories of Change", i.e. their most pressing problems and how they believed they could overcome them to achieve their aspirations. Storytellers were completely free to choose the topic of their story. We then analysed this heap of qualitative information with the youth leaders and fed it into a survey. Through the survey, which was also carried out by the youth leaders, we then tested the qualitative outcomes on a larger sample of the youth population. From the survey results, the youth leaders drew conclusions regarding the main challenges that the respective youth-focused projects in Uganda and Vietnam should try to tackle.

A variety of youth issues identified in Uganda and Vietnam

An analysis of about 50 stories collected in and around Gulu, Uganda, shows that a wide variety of challenges was identified (e.g. unemployment, lack of education, poverty, poor health services, corruption, forced marriage, and drunkenness). The 472 survey respondents confirmed rather "classic" trends: a large majority of respondents, both male and female, identified unemployment, poverty and corruption as the most pressing issues in their lives, whereas forced or early marriage was a most pressing issue for a small minority of female respondents. See the findings from the research in Uganda below: 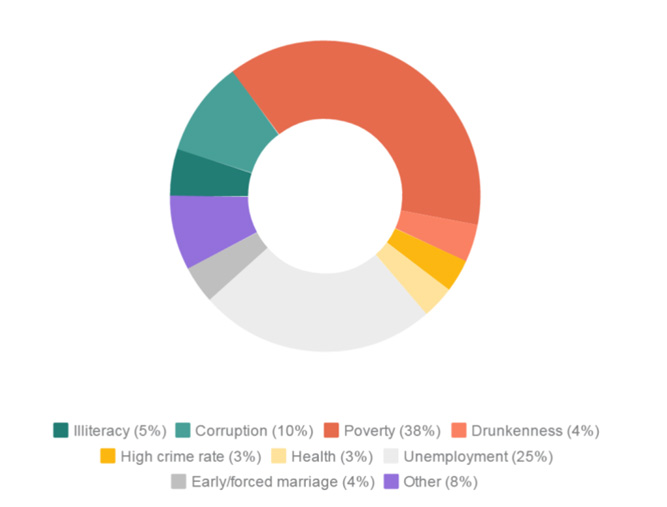 In Hanoi, Vietnam, a selected group of storytellers of urban and educated youth identified mostly challenges and dreams that were closely linked with their specific background (e.g. education, traditions, personal skills, unemployment). This qualitative information was then quantified through a survey that reached 334 respondents in Hanoi. A large majority of respondents identified education, personal orientation and faith as their main challenges. The most often mentioned dream was being able to have a profession of your own choice. See the findings from the research in Vietnam below: 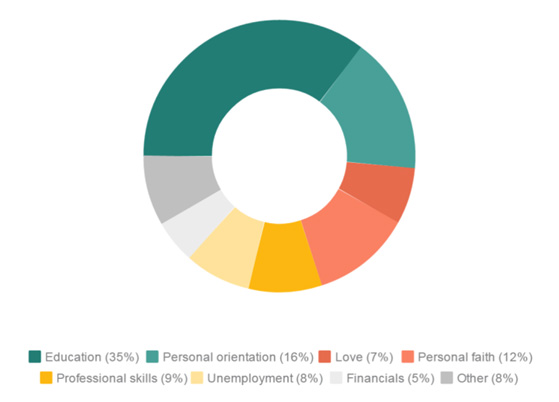 Even though the information itself from both Uganda and Vietnam is not revolutionary, it does derive particular value from the fact that it comes directly from the potential project beneficiaries and implementing partners, and not from lobby groups, authorities or other indirect spokespersons. This ownership by beneficiaries and implementing partners, right from the very inception phase, is considered an additional guarantee for success when, eventually, implementing the respective projects.

Applying the WCP approach at the project design stage leads to uncovering useful information on potential intervention areas. Its particular value-add lies with the involvement, right from the very conception of a project, of the project stakeholders. They identify the most pressing issues themselves through a genuine bottom-up approach, free from any top-down pre-defined objectives. It is this active involvement of project stakeholders that is expected to constitute the basis for true ownership of development projects.

In Uganda, 25 members from various youth groups, both rural and urban, participated in the exercise in April 2015, whereas in Vietnam 14 youth from a primarily urban and educated background participated in April and May 2015.