Can we call the Netherlands a tax haven? What measures can we take to battle tax avoidance? Should we shift the tax burden from labor to capital? These were some of the topics addressed by Dutch politicians during the Make tax Fair Again Election debate, organized by Tax justice Netherlands and De Balie 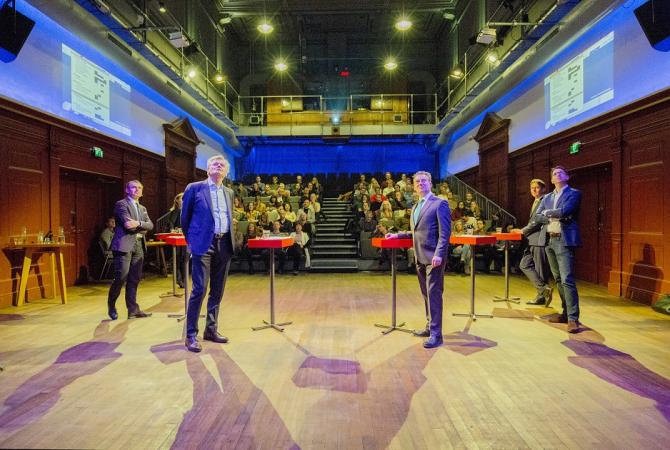 During the debate, moderated by journalist and economist Esther van Rijkswijk, Henk Nijboer (PvdA), Steven van Weyenberg (D66), Arnold Merkies (SP), Martin van Rooijen (50Plus) and Tom van der Lee (Groenlinks) discussed their perspectives on fair taxation and how their parties want to accomplish this. The VVD and CDA were also invited but decided to turn down the invitation.

Cooperation as key to success
While not everyone felt comfortable with using the term ‘Tax Haven’ to describe the Dutch tax system. All parties agreed that the current system facilitates tax avoidance and fosters inequality. International cooperation is seen as a necessary measure to combat this. Even the more euro-critical parties acknowledged the necessity of cooperation on an EU level in the fight against tax avoidance by multinationals. Surprisingly 50Plus stood by the predominantly left-wing parties and expressed their support for a minimum corporate income tax on a European level.

“Trying to fight globalization individually (….) in practice this means that you dance to the tunes of big corporations. You will hollow out democracy in your own country” [translation] – Tom van der Lee (Groenlinks)

Who benefits?
The participating parties together took critical stance towards the current tax system, agreeing that tax tariffs for larger corporations should be raised. What however remained a point of discussion was who would benefit from the financial gains if this measure was to be taken. D66 proposed reinvesting this money into both businesses and society by lowering the social charges for corporations. The PvdA called this ‘morally perverse’, as it would reward companies that in the past engaged with tax avoidance practices. According to the PvdA, everyone should benefit equally from the financial benefits, suggesting that the money should be reinvested in education and infrastructure.

The fourth box
Poet Sjors Talsma closed off the debate, proposing an original solution to tax evasion.  In his poem he suggested adding a fourth tax box: conscience. “A tax on immorality, a refund for modesty” (Talsma). Perhaps this best summarizes the fight against tax inequality. It is up to all of us to take our responsibility and address tax evasion as immoral behavior. This debate was a step in the right direction, providing fruitful ground for cooperation between the participating parties.

The aftermath
The debate proved to be worthwhile in the following days. In the debate, 50Plus not only expressed its support for cooperation on a European level but also publicly gave their approval for a motion, put forward by Arnold Merkies (SP). The motion states that the Second Chamber should not postpone tackling the problem of so-called hybrid mismatches till 2024. Hybrid mismatches can be described as the arrangements that exploit differences in the tax systems of countries to avoid paying any or less taxes (OECD, 2012). Two days after the event in De Balie, the motion was discussed in the Second Chamber and accepted, with the support of 50plus, a party that in the past had not been too concrete on tax evasion.

The debate on the 12th of February was not a debate about the very existence of tax evasion nor the gravity of the situation. It was a discussion about how to turn the tide. It was a debate that made politicians step up against the immoral behavior of tax avoidance.