Partnering with the bad guys

“If businesses were serious about helping to fight poverty, all they needed to do was behave responsibly” (Hilary Jeune, 2014, EU policy advisor at Oxfam International)

Development driven by the private sector

The private sector includes all parts of a national economy that is not under direct state control – such as small-medium sized businesses or large multinational corporations, but also accounting-and taxation firms, and sole proprietors (for instance entrepreneurs, designers, developers, plumbers). But where does the sudden interest in the private sector come from?

The year 2030 is approaching fast and with the ambitious agenda of the Sustainable Development Goals (SDGs) in mind, an increasing amount of resources, technology and innovation will be required in order to achieve those goals. In 2007, the UNDP therefore designed the so called Private Sector Strategy, which is a framework that intents to give practical and strategic advice on private sector development (PSD) and private sector engagement (PSE).

In a time where foreign-aid is increasingly seen as a short-term solution, and donations by governments and the public are decreasing on a yearly base, there is an increasing need for alternative (re-)sources. Contemporary, the private sector is not only seen as central to poverty reduction, but is also widely acknowledged as a critical actor to drive economic growth, create jobs, develop and deliver needed goods and services, and to innovate for more sustainable development solutions. Being a powerful driver of economic and inclusive growth, the private sector can therefore play an important role in shaping the development agenda.

How do you engage with the private sector?

Large multinational corporations are often being displayed as profit maximizing ‘bad guys’ that are exploiting people and the planet. And of course, there is no doubt that a large amount of companies correspond with that image in one way or another – take a look at the Rama Plaza disaster in Bangladesh for instance, or the global palm oil industry that is responsible for enormous deforestations.

As the OECD defines, PSE is an ‘activity that aims to engage the private sector for development results, and involves the active participation of the private sector’. Private Sector Engagement is therefore the systematic effort of development organisations (NGOs) to work with and include businesses for the purpose of development. This new way of approaching the ‘bad guys’ is a contrast to the traditional way of working with businesses. NGOs are now required to engage with those businesses on a more systematic, equal, transparent and long-term basis, in order to achieve long-term systematic changes. Examples of such engagements are for instance WWF’s Palm Oil Buyer’s Scorecard, Solidaridad’s Sustainable Cotton Ranking or Oxfam’s Behind the Brands Campaign.

PHOTO 2: Oxfam’s Behind the Brands Campaign is targeting the top 10 biggest food & beverage companies. Our global food system is complex and its problems are multi-faceted. But the world’s largest food and beverage companies have enormous influence. Their policies drive how food is produced, the way resources are used and the extent to which the benefits trickle down to the marginalized millions at the bottom of their supply chains.

The risk of greenwashing

In recent years, consumers are becoming more and more focussed on positive environmental and social impacts, which in return forces companies to overthink their business strategies. Due to the fact that investors and companies are increasingly concerned about engaging on those issues, the risk of greenwashing increases. An example would be a company promoting that its coffee is being sourced ethically and sustainably, but not mentioning that the corresponding certificate only accounts for a small percentage of their coffee.

Nowadays, corporations are making a lot of effort to demonstrate that they are genuinely dedicated to making environmental and social differences, while in reality, they are often simply using a ‘green curtain to conceal dark motives’ – see for instance Coca-Cola or Rabobank.

So how do you engage with the private sector without running the risk of enabling those companies to greenwash their practices? The answer is simple: You cannot prevent it 100%. However, what can be done is holding companies accountable for the commitments that they make. For instance, when Oxfam launched its Behind the Brands Campaign in 2013, Unilever only scored a 5/10 on ‘Climate’. Three years later, in 2016, Unilever had improved and amended its policies and practices on ‘Climate’ to such an extent, that Oxfam awarded the company with a 9/10. 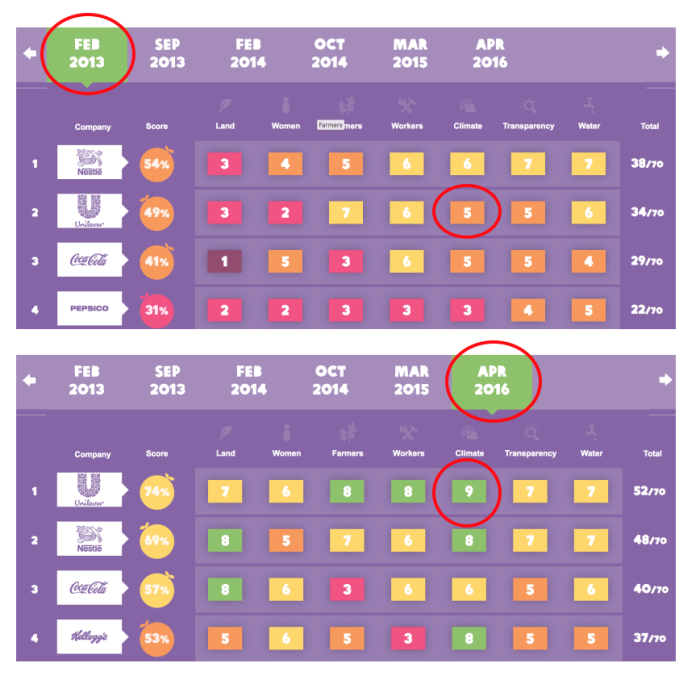 In order to ensure that Unilever (and the other companies) were not making false promises, Oxfam made use of extensive investigations, research, tracking processes and different types of stakeholder interviews. Of course, Unilever also proudly announced that they were leading the industry according to Oxfam’s Behind the Brands Campaign. Such public statements are not only an (internal) motivation for following through on their commitments, but also inspires other businesses to follow their lead. In addition, once you have announced your policy commitments publicly, your brand risk increases enormously if it turns out that you are not living up to those expectations.

Despite the fact that Unilever is still far away from being an exemplary model of an environmentally and socially conscious company, what counts is that the company did move into the right direction. The ability to hold companies accountable (for instance through social media) and react publicly to their actions does not only force companies to comply to their commitments, but it also raises awareness for those existing issues.

“As a project management intern in Oxfam’s GROW Private Sector Campaign team, I am supporting our global team in engaging with the private sector to slowly but surely move these powerful multinationals into a socially and environmentally conscious direction.”

This blog was written by Anne-Kathrin Schmitz, intern for the GROW team.